Today our eating adventure lead us to a quaint little spot in Deep Ellum which did not disappoint by the way. Alligator Cafe was our final stop on the “2014 EATS Hole in the Wall Tour.” Getting to the restaurant was a fiasco within itself due to my GPS lack of updates when a restaurant  may have closed or moved. After driving around the the greater dallas area for 20 mins, we finally  got there just in time for some good eats!

We walked inside the quirky establishment and made our way to the front to place our orders. We decided on getting the fried green tomatoes to tickle our palettes first followed by a chicken po’ boy and a fried platter perfect for any fatty at heart. The platter was to be filled with oysters, alligator and okra, all deep fried to perfection!

Shockingly, self-proclaimed foodie India had never had a green tomato, let alone a fried one! (According to her she couldn’t remember, but if you have had a fried green tomato before you definitely would forget about it!) They serve their fried green tomatoes with shredded mozzarella on top and a side of Creole mustard. The fried tomatoes were perfect, crispy on the outside, warm on the inside with a hint of saltiness. This is a popular thing when I go to my grandma’s house in East Texas. Whenever she grows them in her garden, my mom fries some up for breakfast. Mmm…such a tasty treat now that I think about it. The tomatoes were not only good, but nostalgic.

Now who can turn down a plate full of fried goodies from the sea? I know I can not and I surely will not. I guess I was in a artery clogging mood because I ate all things deep fried that day. As I said before in a previous on an eye-satisfying trip to Social House, I am very picky when it comes to oysters, but Alligator Cafe had some of the best fried oysters I have ever had.

They were fried to perfection and seasoned just right to where I didn’t even need cocktail sauce. Fried gator tail is not something I eat everywhere too because sometimes it can be tough or bland. Being named “Alligator Cafe” you have to have some good gator, and that they did. It was perfect. Not tough and the spice was just right. I rarely eat fried okra, but that was great as well.  Surprisingly I did not feel like I wanted to die after I put at least a pound of fried yumminess in my stomach.

India had the blackened chicken po-boy, per recommendation of the waitress. 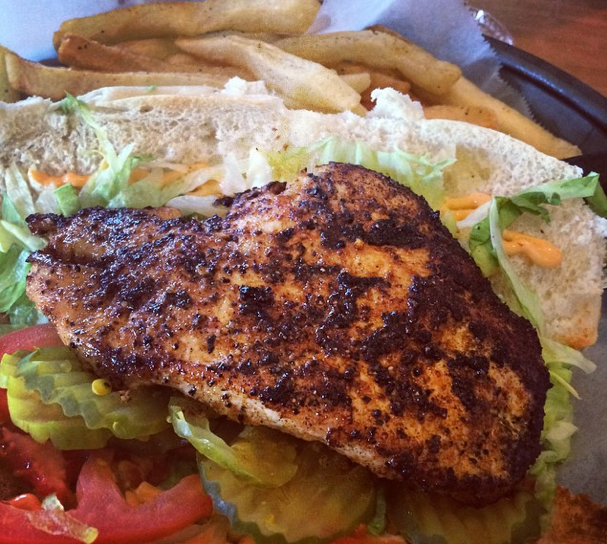 Now, I KNOW you all can clearly see how delicious that po’ boy looks and delicious it was! Seasoned with some delicious Louisiana spices and grilled perfectly, the meal was filling and perfect. It was also served with some french fries which she gobbled up after drowning in a ketchup bath.

Last came dessert. One of India’s favorite desserts is definitely homemade banana pudding. Once she saw that was an option on the menu, she nearly passed out from excitement.

The banana pudding came and went just like that. She describes it as being creamy with the perfect crunch in place. Also, not overbearingly sweet. Nothing that’ll leave you with diabetes after your meal.

Alligator Cafe is definitely a perfect spot for a quick and affordable bite. We are happy this was our last stop on the “2014 EATS Hole in the Wall Tour” and we will definitely be back to try more on the menu!