Oak Cliff thats my hood!!! That’s what we were singing on our way to the local chicken joint Chicken Scratch….well at least I was.

Anywho, we know we are behind on this precious gem, but better late than never right?

The first is more of a family style scene. A nice, cute, and cozy  setting with the option of patio seating.

The second is “The Foundry” which is a bar area that has tables and couches for larger  groups. Being that we are young and popping with no kids, we chose to sit in the ‘The Foundry.’ The only downside to the night was that all the tables were taken so we had to sit in the couch area to enjoy our upcoming chicken feast.

The menu is fixed with a mix of fried and rotisserie chicken. They have the options for numbers of salads, biscuits, and just plain old fried chicken for you chicken enthusiasts. The smell of the rotisserie chicken alone makes we want to do some pretty illegal things, but I held my composure to take a look at the menu. 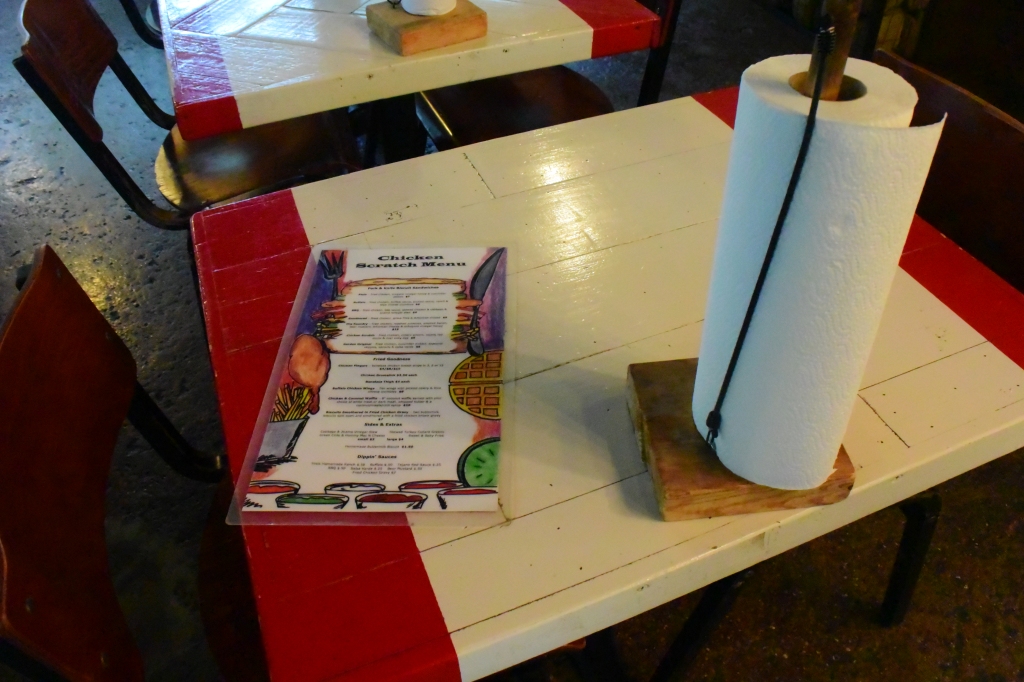 Right when we walked into Chicken Scratch, I immediately saw a sign that said “Chicken And Coconut Waffle,” and if I wasn’t in love before, I definitely was at that  moment. I could not leave without trying that dish, so that is exactly what I got. The  other little treat that grabbed my attention was the green chile and hominy mac n’ cheese.

The waffle was crisp on the outside and fluffy on the inside and was topped with plenty of coconut flakes.

The syrup added the right amount of sweetness that complimented the waffle greatly.

The mac n’ cheese wasnt at all what I expected. The usual southern style mac n’ cheese is creamy, cheesy, and full of flavor; but Chicken Scratch had a different plan on their agenda. They decided to take the southwest route and add green chile and hominy to their dish.

The green chile flavor was burried under a pile of noodles with barely any cheese and chunky hominy. It was more of a pasta salad than mac n’ cheese in my opinion. Every bite I took I was wishing and hoping it would get better and more cheese would show up, but it never happened.

I first decided to wet my palette with a nice refreshing cocktail. I opted for the “El Dibalo” drink, which was a spicy sweet mix. It was a margarita blended with tequila, triple sec, fresh fruit juice, jalepeno juice and topped with a fresh lime. this cocktail was the perfect start to the rest of dinner for me. 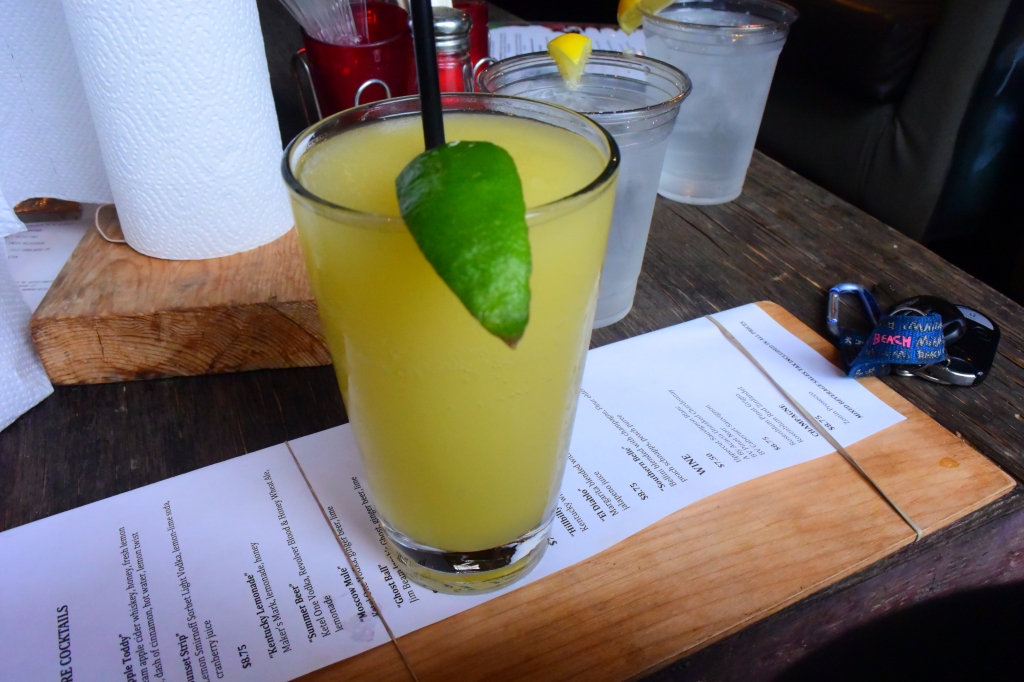 I had ‘The Foundry’ which was from their fork and knife chicken biscuit section.

The fluffy biscuit was filled with a fried piece of chicken, mashed potatoes, smoked bacon, beer mustard, American cheese and oregano vinegar honey. I also got the sweet and salty fries. GIRL. This biscuit was the bomb-DOT-com. The flavors literally took my tastebuds on a whirlwind adventure.

The biscuit melted in my mouth with each bite. This was pretty much like the dressed up more mature version of a Chick-fil-A chicken biscuit sandwich. I have NOTHING bad to say, and I will be back for round two in the near future.

As we were eating, our waitress Brittney literally plopped down and started to tell us about herself. It was rather odd at first because we thought she may have forgotten something, but as we continued to talk to her, it was literally like talking to a friend. She asked us about the blog and revealed she too was a foodie. Funny thing is we found out Brittney just moved to Texas to be a model. Who knew models ate real food???? Not only did we get a great meal, we got excellent service and new EATS blog follower. We enjoyed the meal and the atmosphere. Chicken Scratch is one for the books for sure.