Heeeeeeey fellow foodies! This week we took a little adventure and headed over to Grub Burger Bar on Greenville Avenue in Dallas. We hadn’t had a good burger in a while, so we were hoping that Grub wouldn’t do us wrong. 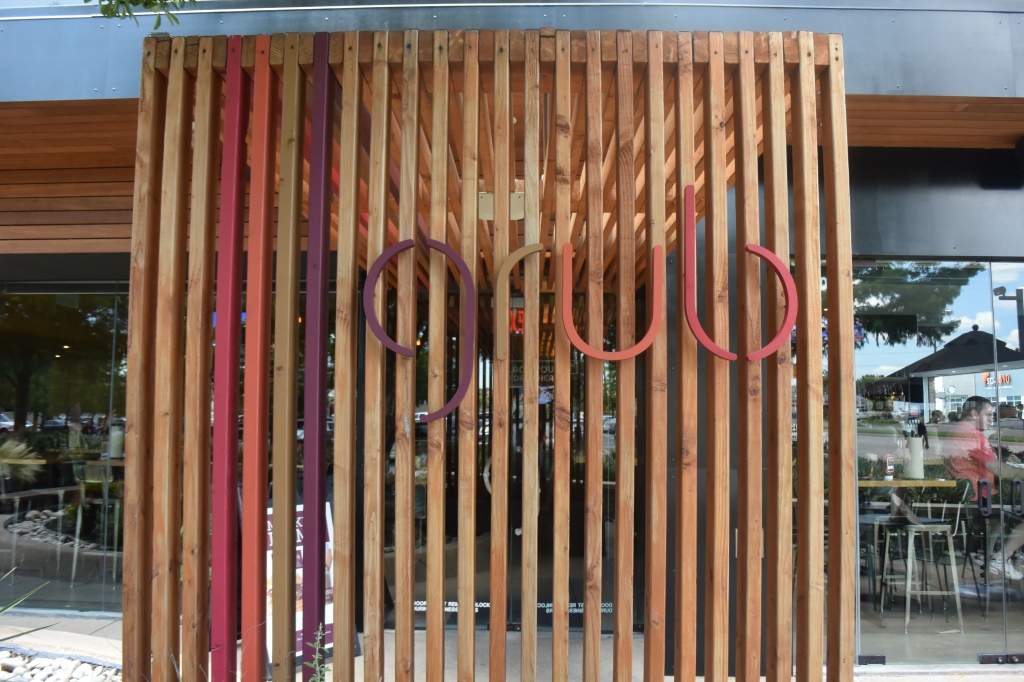 First off, the weather was amazing outside! Actually anything is better than the Texas tsunami we had been dealing with for the last few weeks. 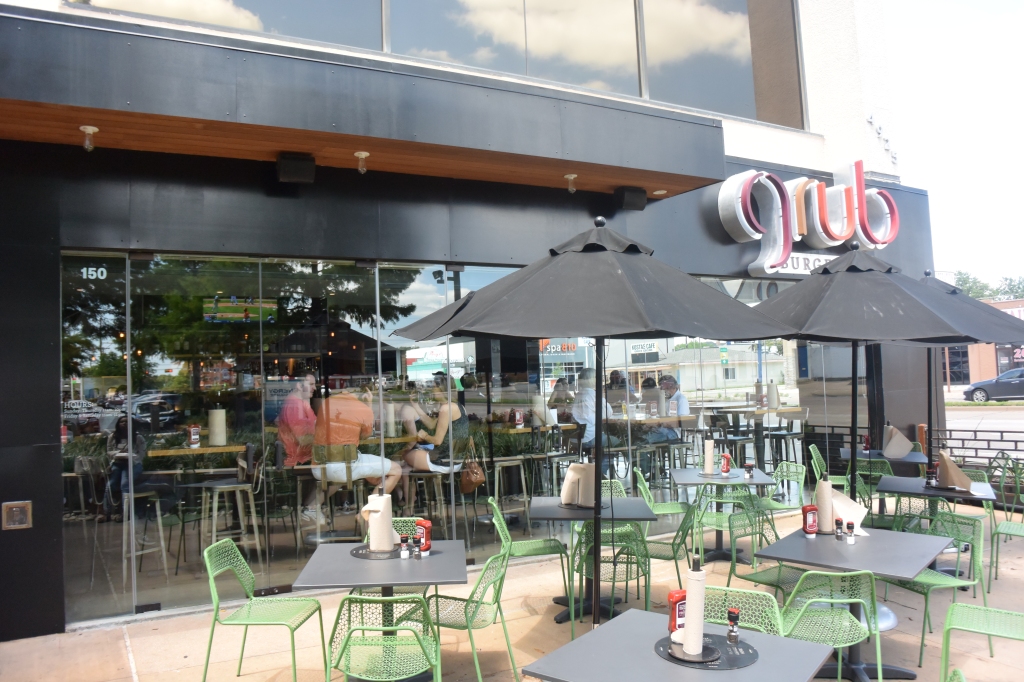 With the sun on our skin and empty tummies touching our backs, we rushed in and grabbed a seat at the bar. 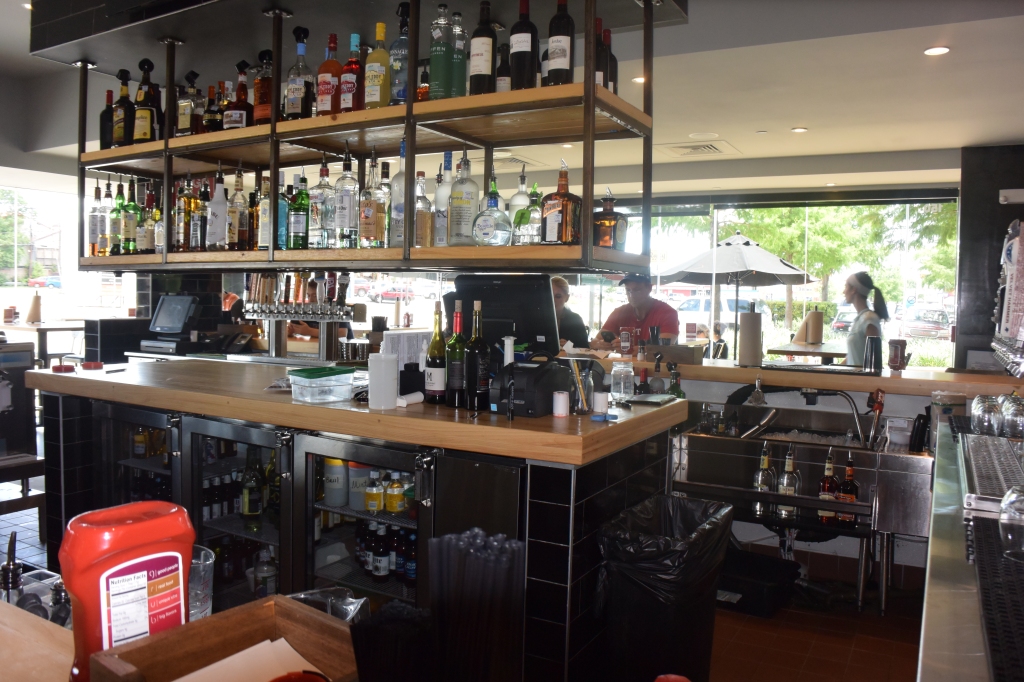 Our waiter was great! He was prompt and super funny! He handed us the menus and gave us some time to decide what we wanted to order.

I won’t bore you any longer with the menial details. You came here for the food, and we are here to give it to you!

We decided to start off with the Luau fries, which consists of tender braised pulled pork, a combo of monterey jack and cheddar cheese, grilled pineapple, jalapeños, and topped with teriyaki and bbq sauce. 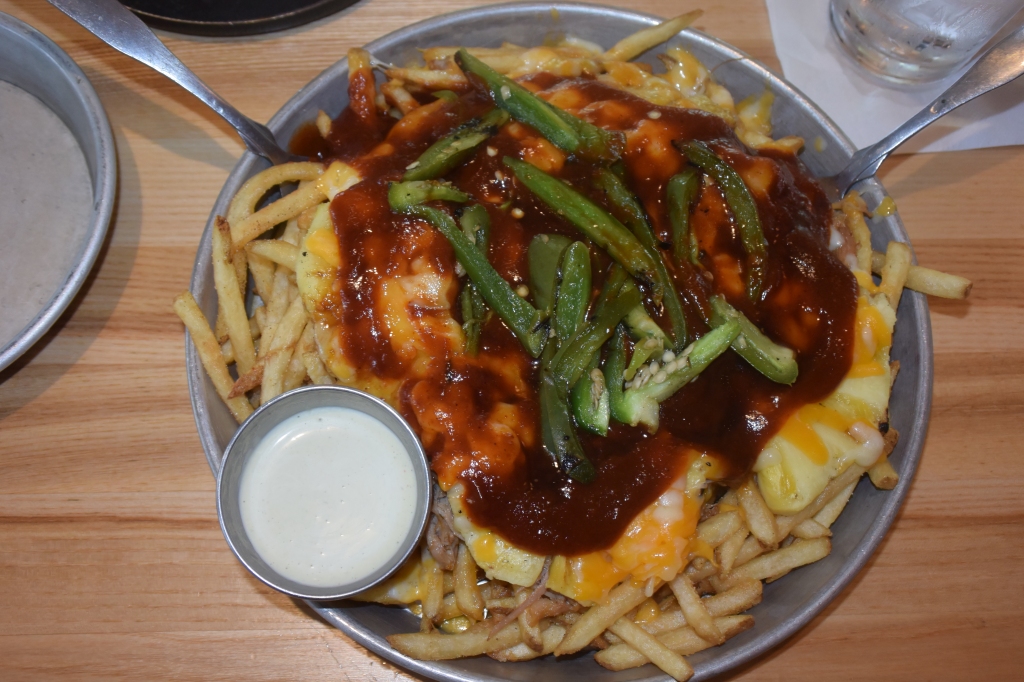 The fries were delicious! The grilled pineapple added a sweet aspect along side the savory pulled pork. 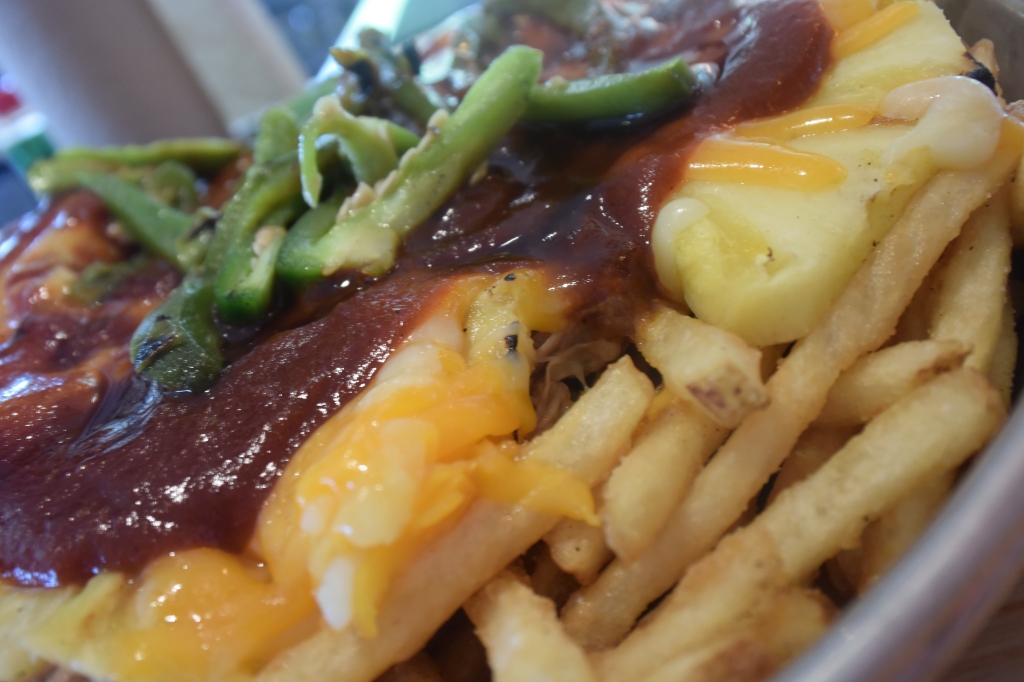 We gobbled up as much as we could but were defeated. It was so many fries, and since we DON’T waste food, we got them packed up in a nice to-go box for us to take home. 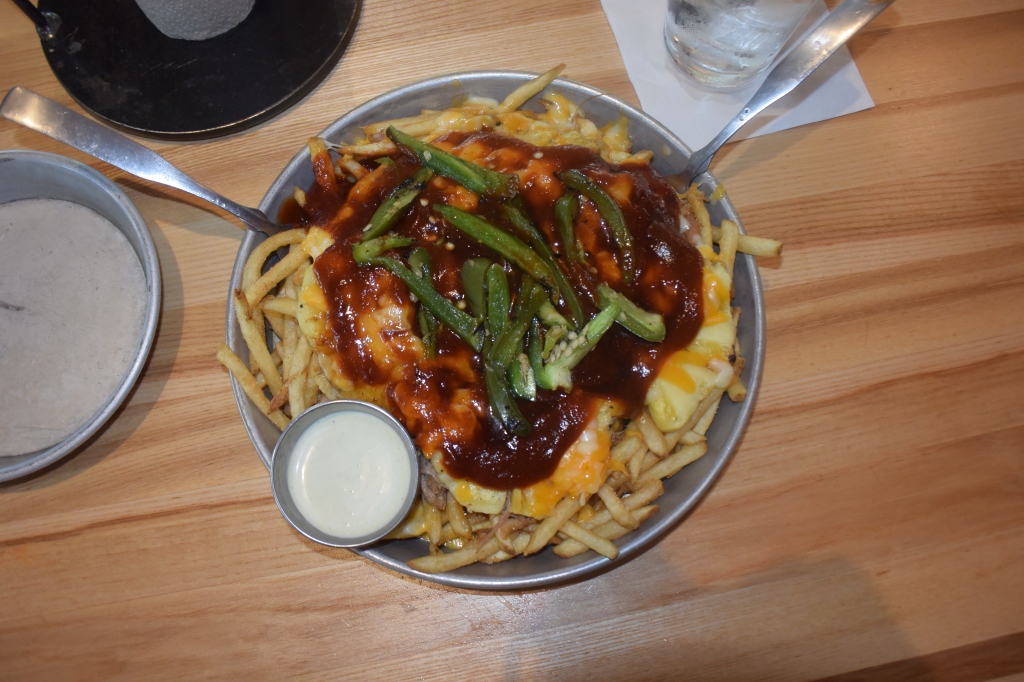 Next it was time for what we came for, the burgers!

If you couldn’t tell already, I am super obsessed with spicy food! Like I need for my mouth to be borderline burning for me to enjoy my meal. lol I opted for the the Ghost burger which I had prepared medium. 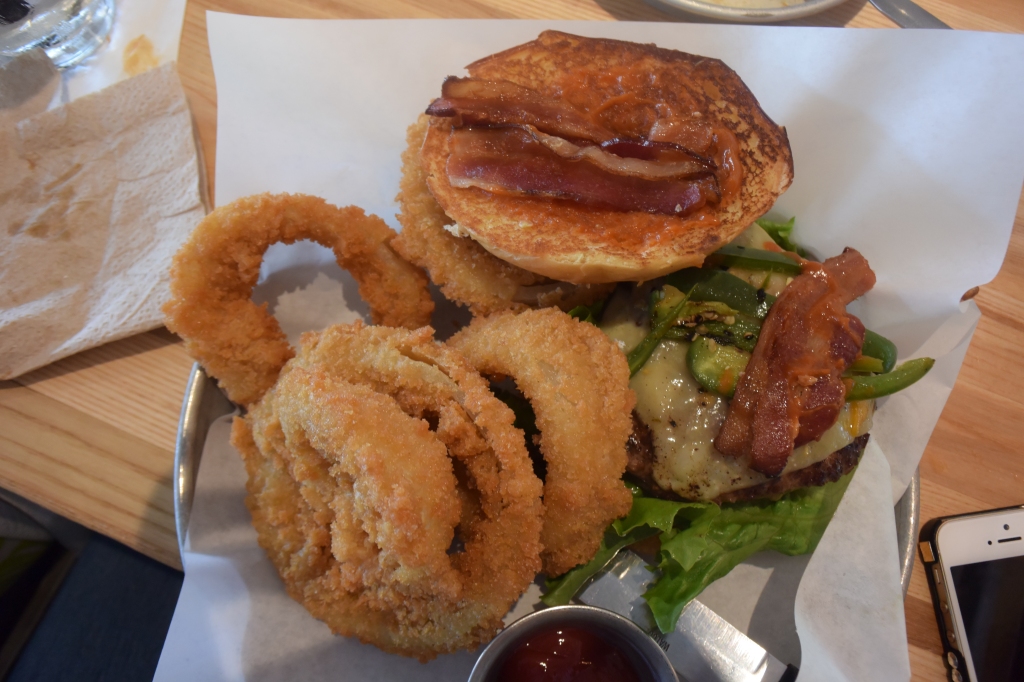 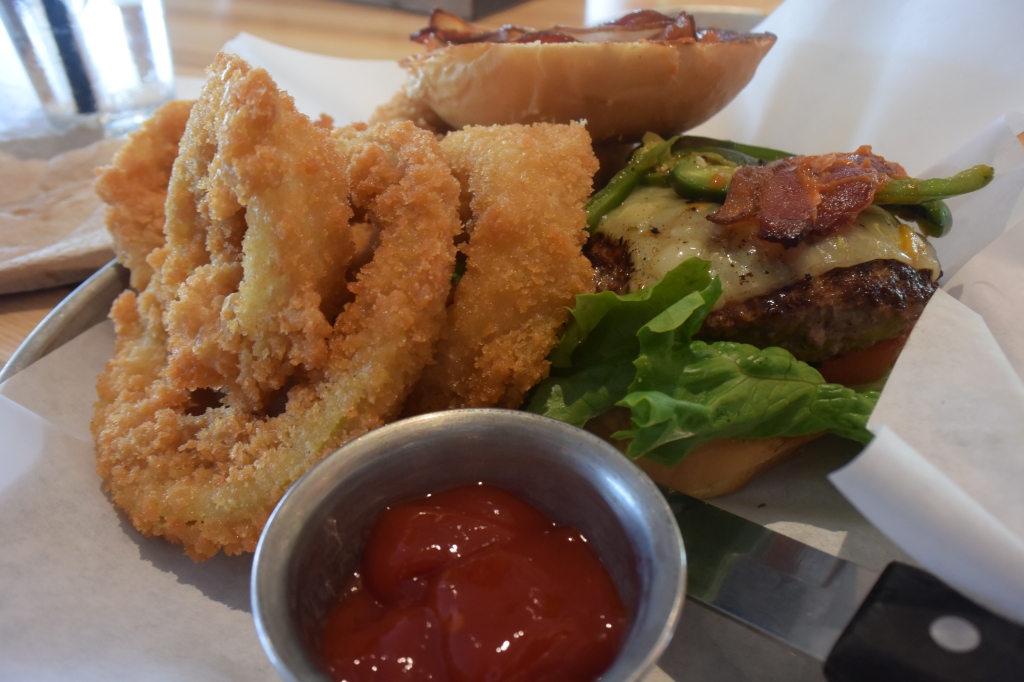 I also had been having a craving for onion rings, so I ordered a side of them. My waiter kind of gave me the side eye when I said that, but I told him that he shouldn’t be judging me. lol He insisted the onion rings would be too much for me and I laughed and told him to add them to my order. I have been eating for years sir, I am sure I will be alright. 🙂 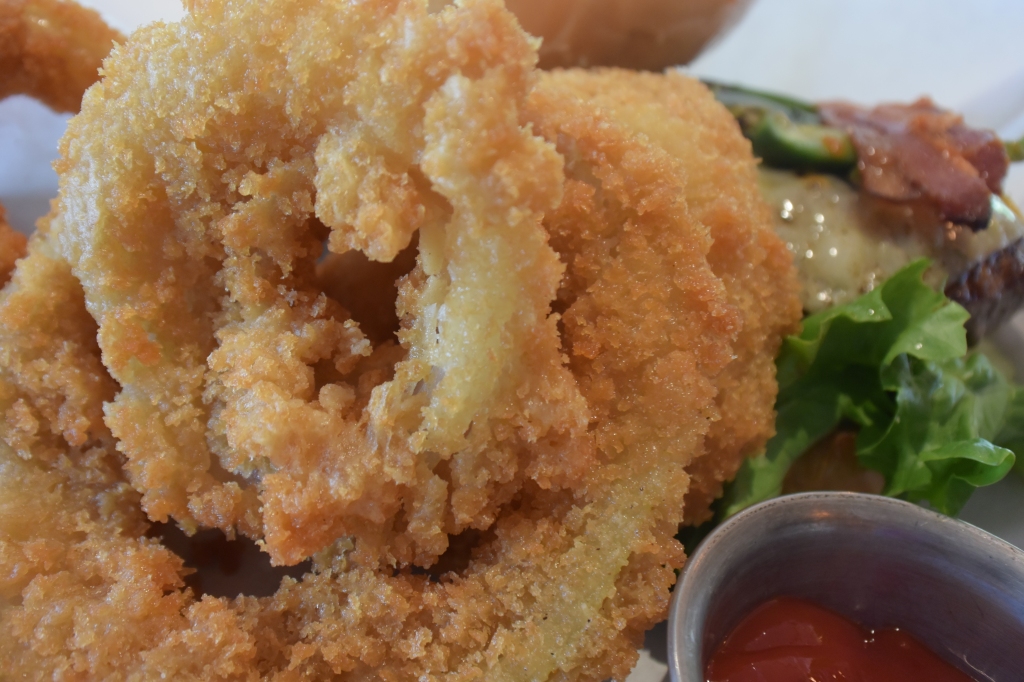 Fire in my mouth made for a happy tummy! I literally gobbled down the first half of my burger. Now the second half is where my inner fatty came out and spoon fed me herself. It was soo yummy I couldn’t bear to stop myself. I pretty much was eating just to eat at that point. lol 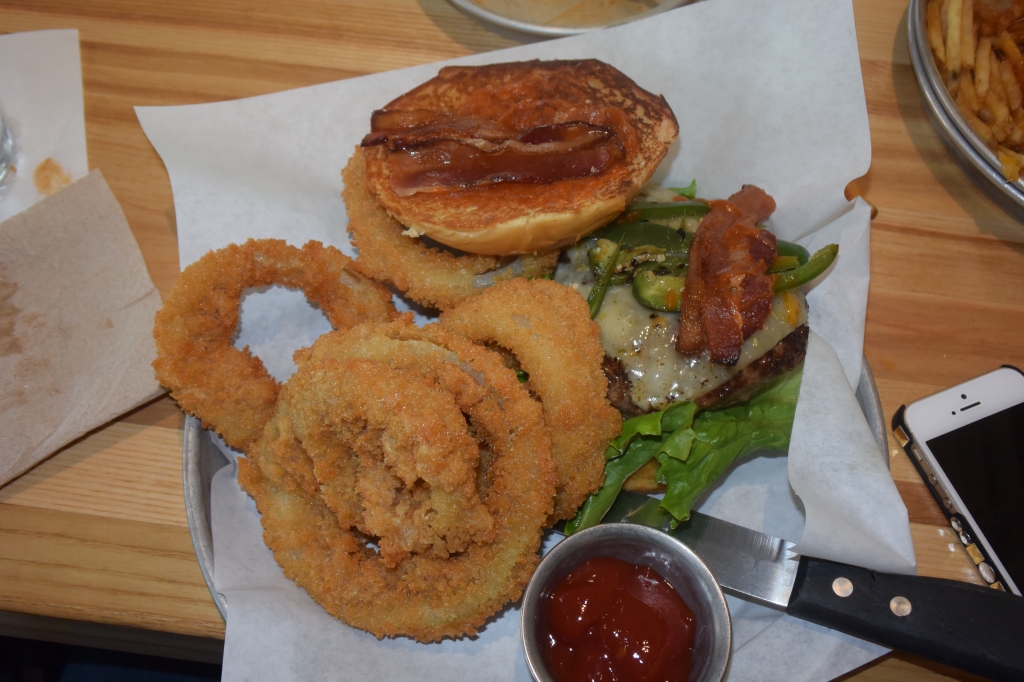 I hate to admit, but my waiter was right. Those onion rings were literally each the size of my head! Theirs include Shiner Bock and are hand battered and deep fried and served along with chipotle ketchup .

They were ginormous and then had a huge coating of breading around them. Nevertheless, they really were delicious. I could only eat two, but I was happy that I had ordered them despite my waiter’s warning. 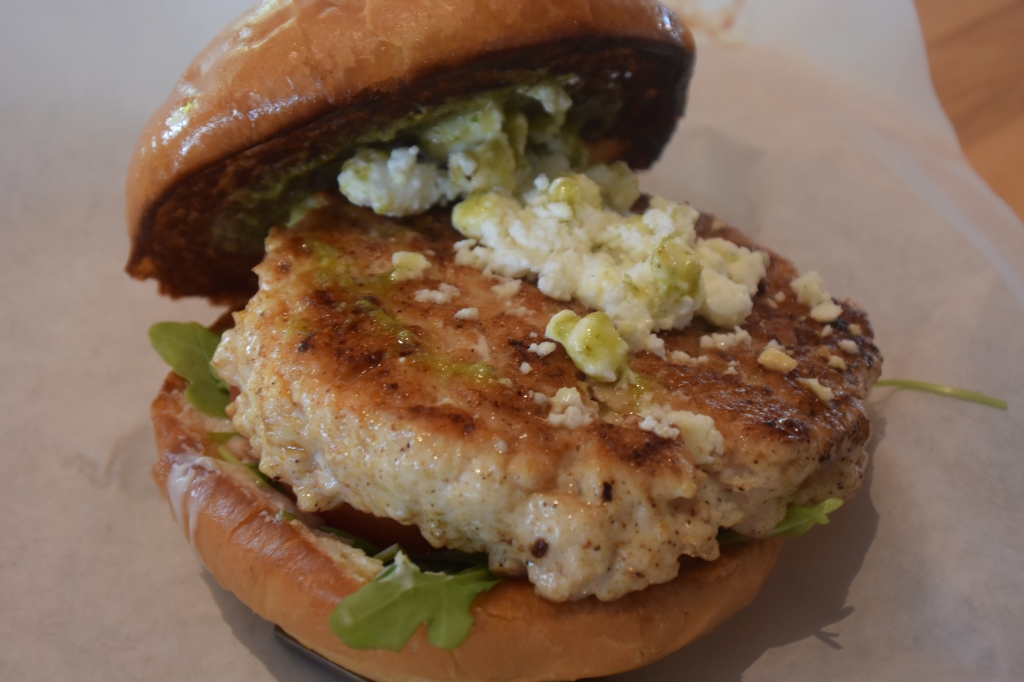 I usually do not partake in the swine (lies), but today I just went with it. Those fries were delicious and they added grilled pineapple for flavor contrast.

I figured the ground chicken would help unclog some of that fat in my arteries…..buuuut they are still clogged so oh well! 🙂

The burger I had was pretty juicy for it being ground chicken. I could also tell that it was seasoned well. Now my first bite was not a mouthgasm and I didnt pass out like I was hoping too…it was just good….

The burger was topped with everything you would find on your standard gyro. The tzatziki sauce tasted as if they had a dill overload and went a little too far. 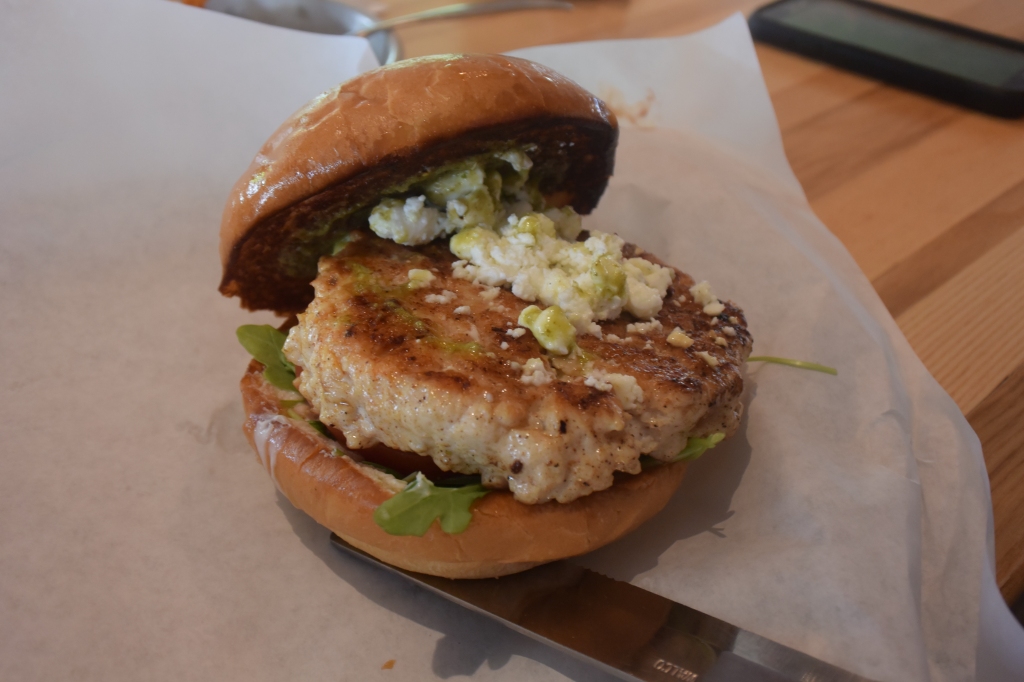 One thing I did enjoy was the lemon caper vinagrette that was drizzled on top.

Grub also has some pretty good buns. These werent your ordinary summer picnic buns from the store. They were fluffy and fresh. I later found out they are made from scratch and are baked fresh throughout the day. As a lover of all carbs, I can greatly appreciate that.

All in all Grub was a delicious choice and we definitely want to come back and try some of those shakes they have. They make them from soft serve so you know that is gonna be good and creamy. They also have some ‘adult’ options so ayyyye turnip! (Well if you are 21 and up that is.)

Again, our bartender (Chris I think that is his name) was really nice and made sure we had a good time even though he tried to judge our carb intake. (We forgive you)

We hope you enjoyed our eating and adventure, and make sure to be on the look out for the next installment.

We definitely agree that Grub is definitely one for the books; but what do we know, we are just two girls looking for their next meal….