Hello again fellow Americans and fellow foodies, we are back again for another eating adventure. This week we hopped in ‘Lex’ (India’s car) and took a trip to a fairly new addition to the Dallas burger scene mostly known as Liberty Burger.

We know why you’re here so…. 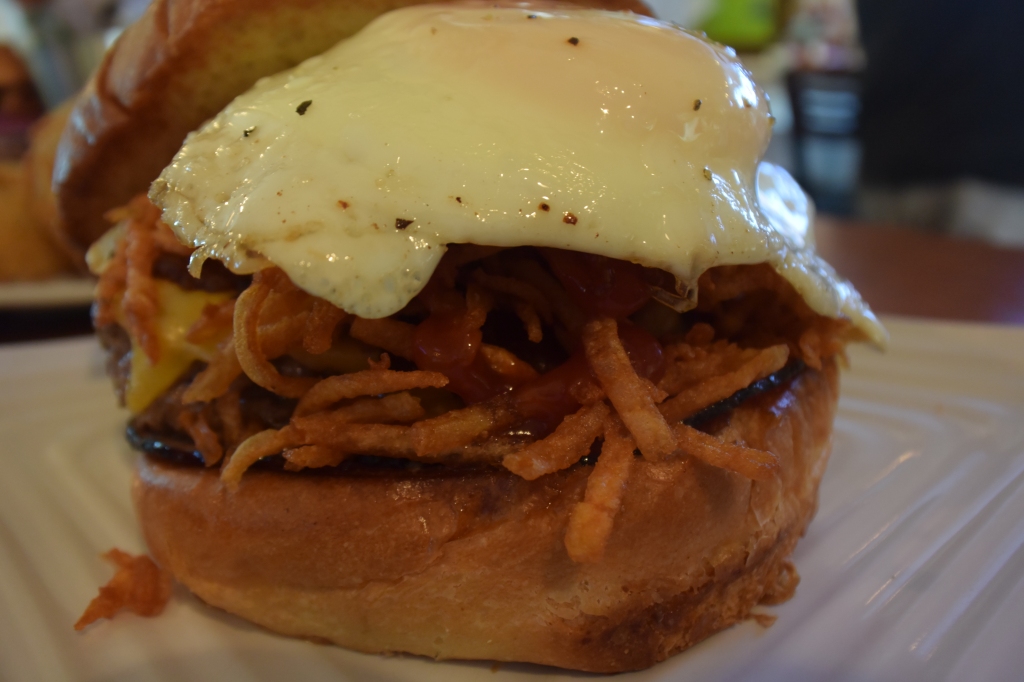 Liberty Burger is home grown in God’s country, or Texas as most of you call it. They also love to help out their communities as best as they can. Their main focus is to not waste anything and recycle as much as they can. In fact, they follow the 3 r’s which include Reduce, Reuse and Recycle. As foodies and lover of restaurants in general, you can see why we can respect a business that cares for their own like Liberty does.

They have only a few items on their menu, and from what we ate they did a good job choosing them.

The hardest part of eating is always deciding what to eat in the first place. *sigh ‘le struggle’* Eventually, we chose our burgers and patiently waited while enjoying the ambiance.

I chose ‘The Napa’ which was topped with a nice medium patty, gorgonzola, roasted tomatoes, onions, olive and topped with a basic garlic aioli. I will say that there could have been less arugula on the burger. I felt as if I had a baby salad on top of a burger. 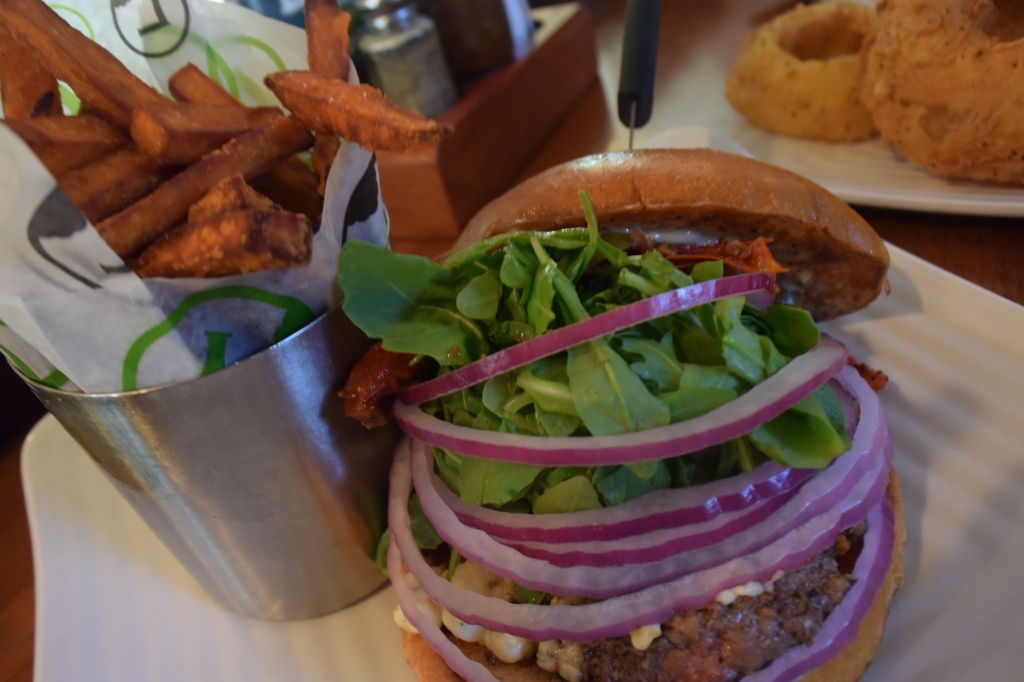 I love arugula as much as the next Real Housewive of Orange County, but this was a little overwheming.

Other than that it was pretty delicious, a bit messy but that’s ok with me. I love a good burger that I need a 5 pack of napkins to eat it with. The Napa did have me wishing I was in wine country for a moment, but I was in Texas and it was 105 degrees. 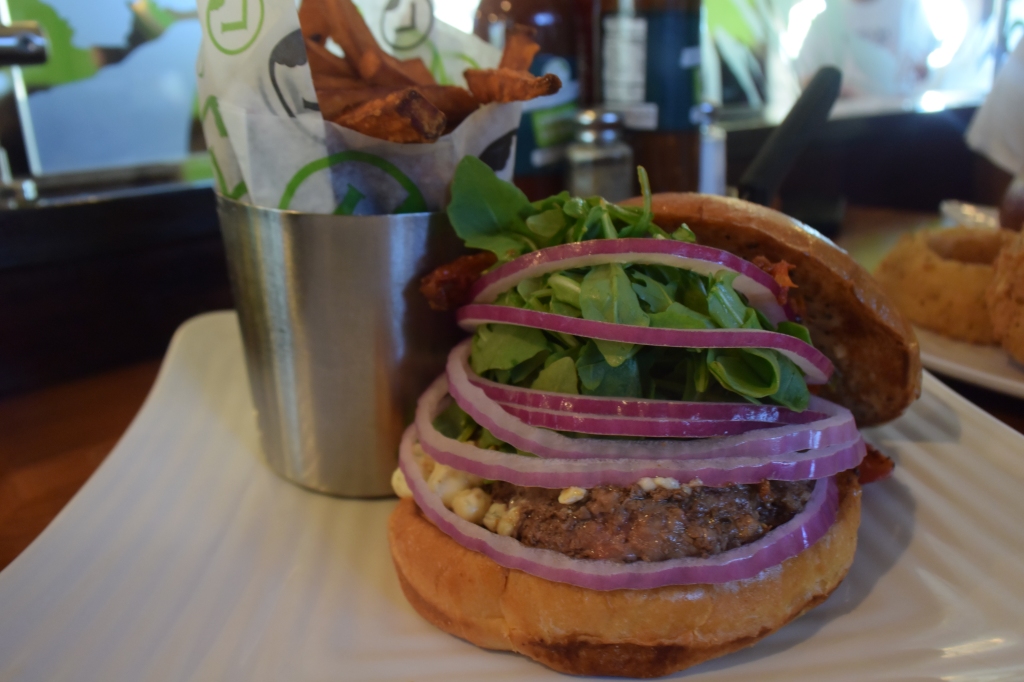 I almost forgot my favorite part!!! So I order a side of sweet potato fries, (surprise right??) ya’ll know I love those crunchy little flavor trinkets. 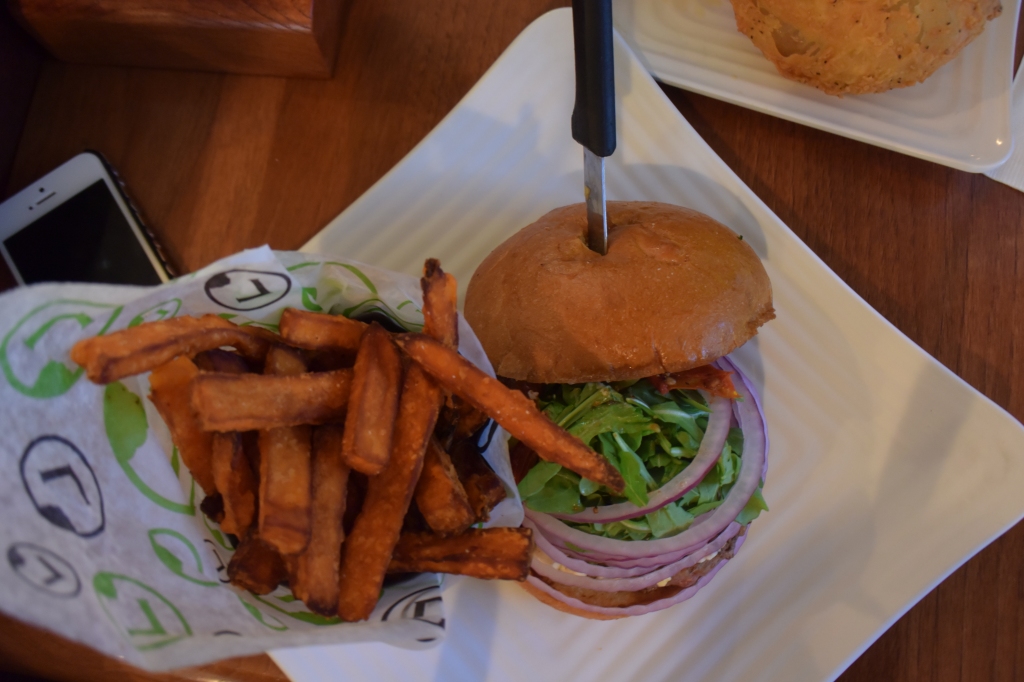 But that was not the best part, Liberty has Chipotle ketchup!!!

I know, we are all tired of restaurants making these basic sauces that have no substance and just make us downright upset, but Liberty got it right. I wish it was a little more spicy, but I’m somewhat of a chili head so that’s just my personal preference. But it was delicous and I ate every bit of my fries because of it.

I chose the ‘Nooner’ which had a beef patty with American cheese, applewood-smoked bacon, ham, hash browns, a fried egg and topped with ketchup.

I was craving something different and I LOOOVE all things breakfast food, so the ‘Nooner’ was the obvious choice.

Let me start of by saving this in one of my top 10 burgers I have even had in my life! Yes, I said it and stand by it!

This burger was pretty much breakfast in the form of a burger. The star of course was that over-easy egg they slapped on top!

Cutting into that egg and watching it run all over my burger gave me a rush only my fellow foodies can understand.

It added the perfect creaminess on top of the crunchy hash browns. Mmmm it’s getting me all rilled up thinking about it again!

Sometimes I also get in my moods where I crave onions rings, and today was one of those days. I love how at Liberty you can order them individually, so I decided to order three so I wouldn’t have to eat a whole order of them.

The onion rings were pretty tasty. Had the perfect amount of crunch from the outside crust and paired perfectly with that chipotle ketchup.

Each bite was slathered in the ketchup pre-entering my mouth. lol

So fellow foodies, we have conquered yet another successful Dallas restaurant on the 2015 Summer Food Tour. We hope you enjoyed this ‘episode’ and will tune in next time.

Or not…I mean what do we know? We are only just two girls looking for their next meal……

There was an error retrieving images from Instagram. An attempt will be remade in a few minutes.